Turkey is often cut into parts, packaged, and sold fresh or frozen. Turkey breasts, drumsticks, thighs, and wings can be sold this way. The breast section of a turkey is quite large and it is often cut into smaller cutlets that are thinly sliced. 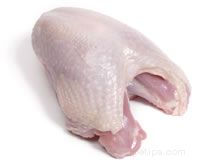 Breast Half - Not Boned

Turkey breast is all white meat, very low in fat, and high in protein. It is available fresh or frozen and bone-in or boneless. Turkey breast can be purchased whole or split.

It is usually less expensive to purchase a whole, bone-in breast and perform the boning and cutting at home. A premium is charged for turkey pieces that have been boned and trimmed because of the extra labor involved.

The meat from the breast is one of the most nutritious meat sources available. It is low in calories, fat, cholesterol, and sodium. If the skin is removed, turkey breast is a good food source for people on low-fat and/or low sodium diets.

Turkey breast can be divided into smaller cuts and packaged such as turkey steaks, slices, or tenderloin. A turkey tenderloin is a small section of the breast meat that is removed from the inside of the breast near the keel bone. They are boneless and skinless and usually weigh between 6 and 12 ounces. They are available fresh or frozen.

Turkey wings are all white meat and can be purchased whole or in sections.

The portion of the wing nearest to the body can be cut between the shoulder joint and the elbow joint. This section, known as the drummette, can be larger than a drumstick of a chicken depending on the size of the turkey.

The flat middle section of the wing between the elbow and the wing tip can be cut as one piece.

Wing tips, which do not contain much meat, may be packaged and sold for the purpose of adding flavor to soups and stocks. 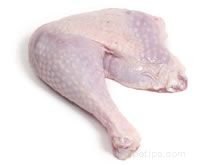 Marketed fresh or frozen, the hind quarter includes the drumstick, thigh, and part of the back. It consists entirely of dark meat and range in weight from 2 to 6 pounds.

The thigh is the upper part of the leg above the knee joint. Thighs are marketed as bone-in, with or without skin, or boneless, with or without skin. Bone-in thighs with skin are usually available in weights ranging from half a pound to 1½ pounds and contain all dark meat.

The drumstick is the lower part of the leg below the knee joint. Bone-in drumsticks are usually available in weights ranging from half a pound to 1½ pounds.

Giblets consist of the liver, heart, and gizzard. When purchasing a whole turkey that has been commercially processed, the giblets (which are usually placed in a bag) and the neck are inserted inside the body cavity.

There currently aren't any reviews or comments for this article. Be the first!